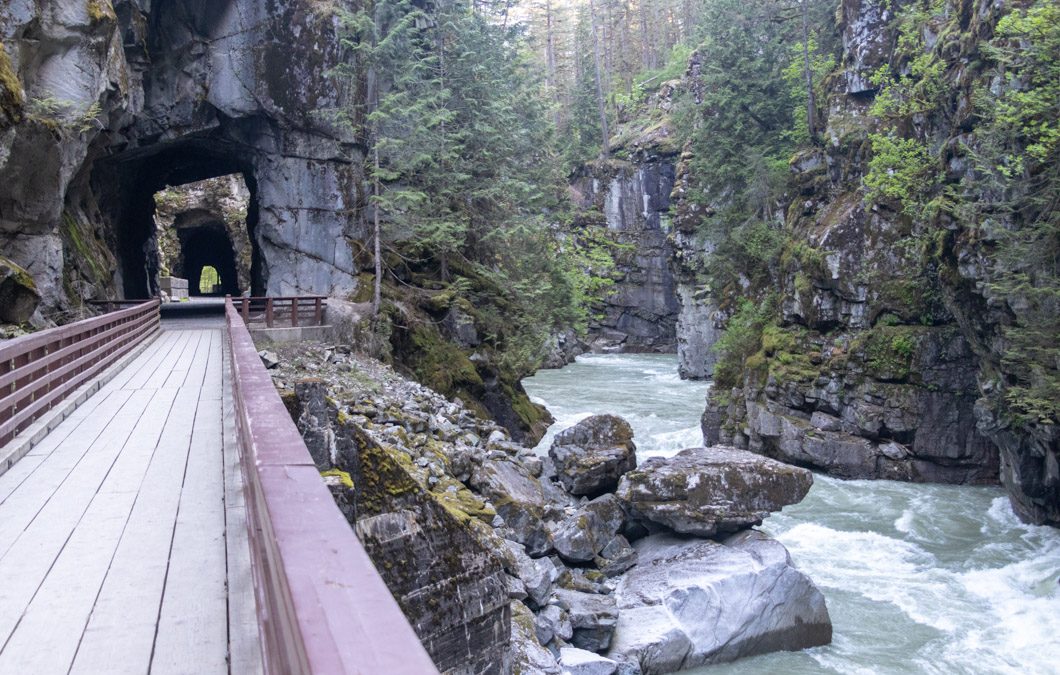 The park is closed for the winter months due to ice, falling rocks, and unstable conditions. The park will re-open in the spring.

The Othello Tunnels are a series of old train tunnels and bridges that cut through the solid granite walls and pass over the wild Coquihalla River. The tunnels are located just east of the town of Hope, BC, in the Coquihalla Provincial Park and the trail is a short, flat 3.5km return route.

In the early 1900’s, the Canadian Pacific Railway decided to connect the southern coast of British Columbia with the Kootenays and it was determined the best option was a route through the Coquihalla Gorge. Today, the route no longer has railway tracks and has been restored as part of the Kettle Valley Railway Trail, a popular cycling route that follows the old train routes over trestles and through tunnels and is noted for it’s gradual change in elevation.

The Coast Mountain Range proved quite a challenge to build a railway through and walking over the bridges in the Othello Tunnels area, it becomes quite evident how difficult it must have been. The sheer rock cliffs, the violently rushing water below, and the remoteness makes it seem incredible that any infrastructure could be built in such an environment, let alone over 100-years ago with limited engineering equipment.

From the parking lot, follow the signs along the wide trail near the Coquihalla River. The former railroad bed is flat and an easy walk for families of all ages. Not far along, the first tunnel can be seen ahead as you follow the trail into the dark tunnel. The trail briefly exits the tunnel before entering tunnel #2.

After existing tunnel #2, the route crosses a bridge where the Coquihalla River rages through the rocky canyon below. Continue walking through tunnel #3 to another bridge with views of the canyon. After walking through tunnel #4, the Othello Tunnels route abruptly ends, although the trail keeps going all the way to the town of Hope. At the end of the tunnels is the turnaround point where visitors walk back through the same tunnels, returning to the parking lot.

One other piece of history, due to the canyon’s rugged look, the park has made several appearances in popular films over the years. The most notable was Rambo First Blood where the cliff above Tunnel #2 was used in the spectacular cliff jump scene. Other movies that filmed scenes around Othello Tunnels include Fire With Fire, The Adventures of Yellow Dog, and Shoot To Kill.